It's a Browser based old-school Amiga Music Tracker in plain old javascript. 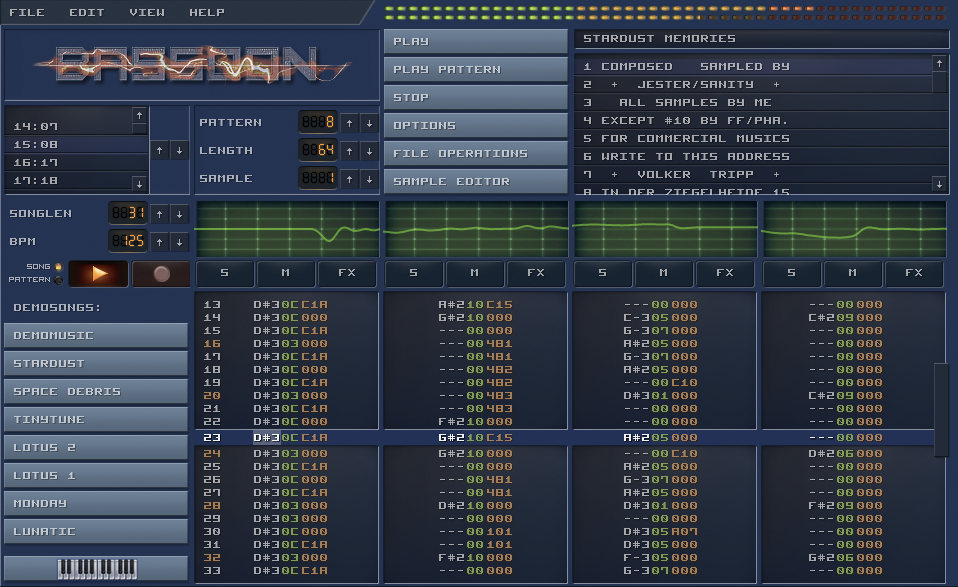 If you have ever heard of Protracker or Fasttracker, then you know the drill,
if not, then you are probably too young :-)

Check it out at http://www.stef.be/bassoontracker/

Tracker music originated way back in 1987 on the Amiga computer.
This was an era where PC's only made bleep sounds.
Even as the Atari could produce some funky chip sounds, then there was this all-singing-all-dancing Amiga machine that could produce 4 channel wave-audio.
Ok, it was still 8-bit sound, but suddenly everybody could access a digital music creation tool for an affordable price where previously you would have to spend a fortune on hardware samplers and midi interfaces to get the same possibilities.
My first sampler I soldered myself: You could plug it into the parallel port of the Amiga to "record" analog audio signals into 8-bit samples. It produced very low quality samples, but ohh... the wonder of it all!

It also was en era where user interface design was non existent so yes: the interface is a bit ... "special" :-) 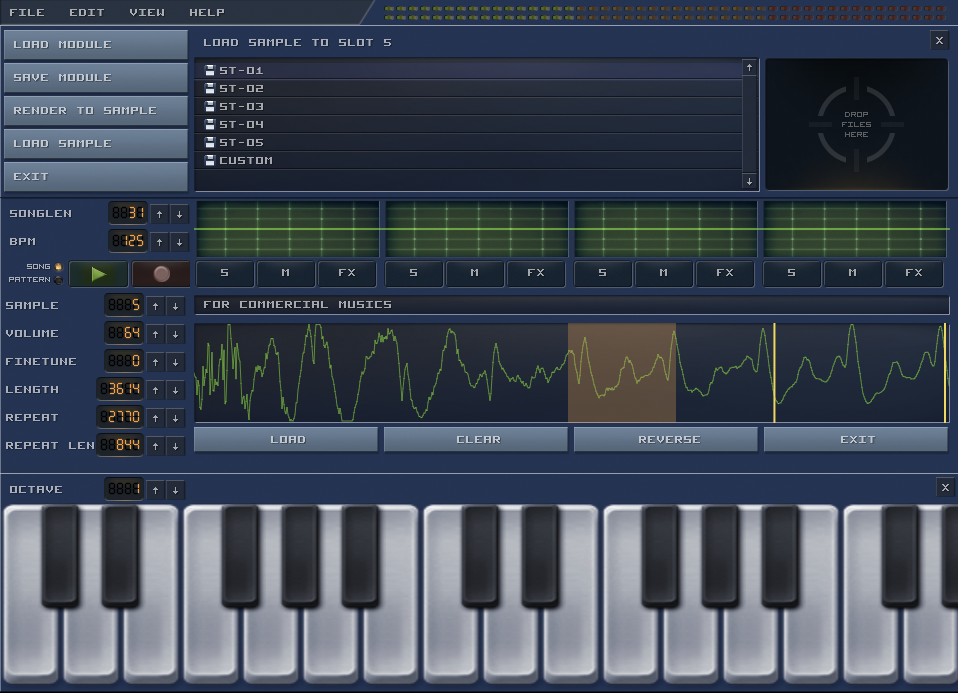 Tracker programs where made by developers for developers: You don't enter notes on a musical bar, you enter notes as numbers in a grid with your computer keyboard and you apply effects by entering even more numbers.
All in hexadecimal of course, as plain decimal number are for pussies.

I especially like the format because you sort of get the sheet-music AND the instruments together with the song.
If you hear a cool piece and go like "Wow, how did they do that?" you can jump right in and examine what samples are used and what effects are applied.
It's like an open-source music format where you can do a "view source" to see exactly how it's done and fiddle with it, much as you can do with any website or web application.

The golden age of the Amiga is long gone, but the tracker format lives on. There have been countless spin-offs and remakes.
Even in modern audio software like Renoise, Radium and Sunvox the tracker spirit is present.
And of course there's openMPT: It doesn't have a cool and snazzy interface but it's the most compatible and complete true tracker around.

Remember: these are not just mp3 files you hear, the music is reproduced using samples that are played and manipulated in sequence in real-time.
This is why mod files in general are quite small, making them perfect for (early) games and other projects where file size is important.
Even the super popular Unity game platform still has support for tracker formats

Playing mod files in a browser is nothing new, but still I wanted to create my own tracker for the following reasons:

Anyway - here are some examples!

Even more?
The ModArchive hosts thousands of tracker songs and they have an API so you can directly access them from within Bassoon Tracker.

The source files are available on GitHub.


Have fun, and if you think of any cool feature you're missing: let me know!

This is http://blog.stef.be optimised for your mobile device